It’s been almost four years since the ‘Euromaidan’ protests ousted the unpopular Ukrainian president Viktor Yanukovych. Despite citizens hoped for better governance, allegations have been raised that the current president Petro Poroshenko has built up a new system of corruption. Events culminated when the Ukrainian police tried to arrest the Poroshenko-critic Mikheil Saakashvili in December, but was stopped by his supporters. Time to do a follow-up on the Ukraine!

This week’s graph looks at the country’s level of executive corruption since its independence in 1991 and compares it to the East-Central European average. V-Dem’s executive corruption index measures how often members of the executive accept bribes in return for favors or misuse state resources for personal purposes. It ranges from zero to one, where higher values indicate higher levels of corruption.

As can be seen in the graph, corruption has been a widespread problem throughout Ukraine’s recent history. However, the year 2014 marked a watershed when in the aftermath of the revolution the prevalence of corruption receded significantly. Since then, the anti-corruption efforts seem to have stagnated under Poroshenko’s rule. But there is no clear evidence of a backslide to previous levels yet. Nevertheless, the graph for the Eastern and Central European countries highlights that Ukraine has still a long way to go to reach at least the regional average.

If you want to learn more about the state of democracy after the Ukrainian revolution, use our online analysis tools at v-dem.net. 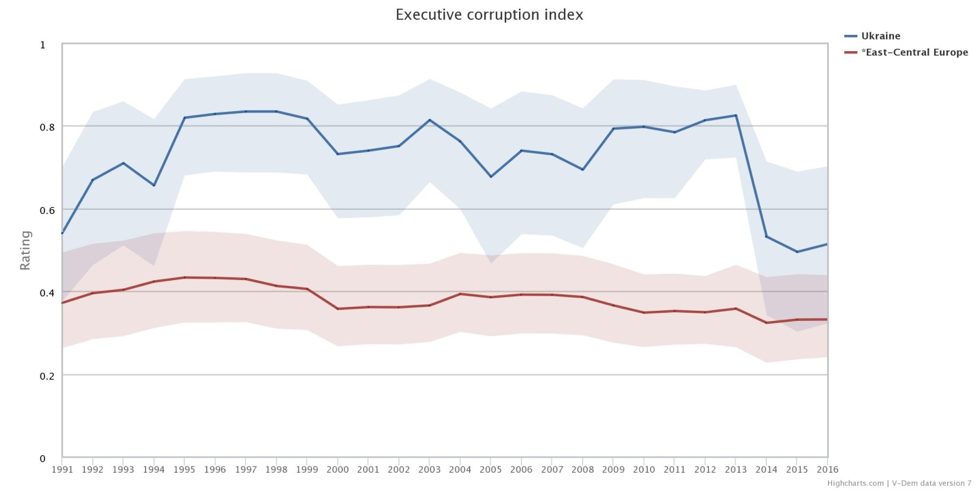